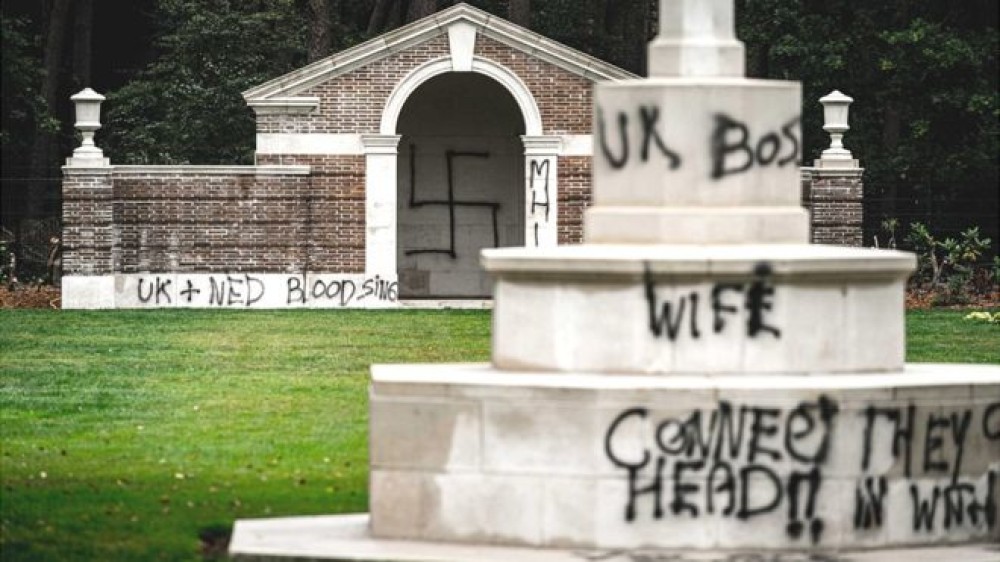 Vandals have spray-painted graffiti including a big swastika at a British and Commonwealth World War Two cemetery in the Netherlands.

Random letters were daubed on many headstones at the Mierlo cemetery, near Eindhoven in the southern Netherlands.

The Commonwealth War Graves Commission (CWGC) said it was "appalled", just days after previous damage to the site.

In October 2019, Prince Charles will attend a Dutch commemoration of the 1944 Battle of Arnhem.

It will be part of the 75th anniversary of the Allies' liberation of the Netherlands from Nazi occupation.

The Mierlo cemetery (pictured below) is the final resting place of 664 British and Commonwealth soldiers and one Dutch soldier.

The graffiti included "MH17 lie" - a provocative reference to the downing of Malaysia Airlines Flight MH17 over eastern Ukraine in July 2014, which killed 298 people, of whom 193 were Dutch.

International investigators concluded that the jet was hit by a Russian-made Buk missile, fired from an area held by Russian-backed separatists.

Condemning the vandals, the CWGC said "it is distressing to see the damage on the headstones themselves, behind every one of those war graves is a human story of someone who gave their life while in service".

One of its reporters said "it's not just a bit of daubing here, no, they've daubed everywhere".

"There's a letter daubed on nearly every headstone. Unbelievable."

Graffiti attacks on places of workshop are common and incidents have occured in Warwickshire.